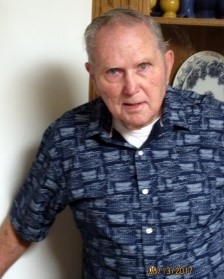 Ward grew up 25 miles south of Fresno, California on a 40-acre grape farm. He worked on his grandparents’ farm as well as other farms in the area as a young boy. When he turned 18, he worked 8 fire seasons for US Forest Service in the Sierra National Forest while attending Fresno State.  He also completed course work at 9 other universities and colleges in California.  All of Ward’s college work was in the field of horticulture and biology.

Mr. Hastings taught junior high, high school, and at the college level for 18 years before becoming a licensed Landscape Contractor. Ward was in the landscaping business for 30 years with a specialty in erosion and sediment control. He established his own private business with clients as far south as Big Sur and as far north as Pacifica, California.  He received his CPESC certification in 1983 and was given the number 168 and was very instrumental in the early establishment of the CPESC program.

Ward was a director of the Resource Conservation District (RCD) of Santa Cruz County, California for over 30 years serving as president of the board in the 1970s and early 1980s.  He continued to serve as an associate director for many years until his retirement in 2016.  In 1977, when he was president of the RCD Board, Rich Casale, CPESC #3, and Jim Barrett, CPESC #2, brought the idea of an erosion and sediment control certification program to the Board’s attention at a regular meeting of the Board.  The Board, under Ward’s leadership, liked the idea so much that they decided to support and help forward the establishment of a certification program, along with the Soil and Water Conservation Society (SWCS), at the local, state and national level.

In the early years of CPESC, Ward served on the CPESC Promotions Committee under the National SWCS for several years. He also presented training sessions and CPESC exam tutorials at both International Erosion Control Association (IECA) and SWCS annual conferences along with John Petersen.  Ward attended many annual IECA conferences over the years because he learned about cutting edge erosion control information and products and he saw an opportunity for IECA to become involved in the CPESC program.

One of Ward’s biggest contributions to CPESC was when he went to the SWCS Annual Meeting in Edmonton, Canada.  At that meeting he suggested that SWCS promote the CPESC program at the next IECA meeting which was held in Washington D.C. the following year.  Ward went to the Washington DC IECA conference, paid $75 for table space, and put a CPESC display together with Jim Barrett and John Petersen.  IECA became a co-sponsor of CPESC shortly thereafter.